One spring, many years ago I was invited to Sugar Bush. There I was taught traditional methods of harvesting and processing  sap collected for medicine… made under the Sugar Makers Moon.

Rising sap from the roots of the Sugar Maple has been regarded as a big medicine used by many tribes and was highly celebrated.

Sap is one of the first gifts of the new year and Sugar Bush was a very anticipated event. Everyone in the community takes part.

Sugar Bush was held about the same time every year, but you had to be well prepared because the window of opportunity to harvest this sap is quite narrow and the moon is the indicator.

The moon plays a very important role in everything concerning growth and new life because it has so much to do with the Earths water supply and movements.

The moon is a tell tale sign of what is to come and stories passed down from generations let people know what to expect from the land in the way of gifts.

Historically, full Moon names were used to track the seasons and, for this reason, often relate closely to nature. The Moon names that we use today stem from Native American and Colonial-era sources. Traditionally, each full Moon name was applied to the entire lunar month in which it occurred, rather than just the full Moon itself.

The Sucker or Fish Moon-This is the time when most of the ice has cleared the Great Lakes region and the yearly spring fish spawn soon follows. Starting with the perch, salmon/steelhead, sucker, walleye, pike then bass…This spring moon brought the first large amount of fats and proteins off the land for the people.

The Seed Moon– Just like the name implies…seed. It is the time to prep the land and seeds for planting. This is a great indicator of change for the year to come!

The Full Pink Moon– There were many signs that the creator gave to the caretakers of the land. In the spring came great storms to feed the Earth and everything OF the Earth. Clouds could cover the moon’s phases during the spring and there were other signs that came from the land as well to let us know how to plan for the next gifts FROM the land we would receive…

The Full Pink moon was a direct reference to Phlox-subulata or “creeping phlox”.

The Sugar Makers Moon- The first full moon of the spring and in the north, spring brings new life, new hope and new gifts from the land. It is the time when the sap returns from the roots of the Sugar Maple tree. It is a time to prepare , collect and preserve the sap.

The Breaking Ice Moon- The moon above the mighty Great Lakes that overseas the breaking up and water flowing out to the ocean and lesser bodies of water that now need this “spring flush“. It is a time to stay off the ice and prepare for water levels to rise and weather begins to warm.

The Broken Snowshoe Moon- This moon is a warning to our tribes further North. It means that warmer weather fast approaches and many of the signs of spring will soon be. Put the snow shoes away- the lack of snow will cause snowshoes to break under foot on solid ground.

These are indigenous teachings interpreted from their creator to First Nation Tribes and now to you.

At the time, these stories made much sense to me because the “gifts” were tangible and real.

These old journal entries were my first real introduction and interpretation of what the first people religion entailed.

I soon realized it was a pathway to better understand the miracles of life god provides for his children.

The woods is a miraculous place for me.

It is my true church.

Below are common plant medicines of The Ojibwe-My gift to you!

Common Milkweed (Asclepias syriaca L.) “caboˈ sîkûn” [milk] or “înîniˈwûnj” [Indian plant], according to Flambeau Ojibwe.Although the Pillager Ojibwe used this chiefly for food, the root was also used as a female remedy, but for what phase of illness, we were not able to discover. Eclectic practitioners have used the roots as counter-irritants or internally as stomachics, carminatives, or anti-spasmodics of the stimulating class.

Spotted Touch-me-not (Impatiens biflora Walt.) “wesaˈ wûs gaˈskonêk” [yellow light]. Bearskin, Flambeau medicine man said that the fresh juice of this plant rubbed on the head would cure a headache. The leaves are steeped for a medicinal tea, but the ailment was undiscovered.

The herbage of this plant, under the name Wild Celadine, has been largely employed by homoeopathic physicians and eclectics. The chemical constituents are not known though the leaves apparently contain tannin. The medicinal value is questionable, though fresh applications of the juice appear to relieve skin irritations of various kinds, especially that of Poison Ivy.

Paper Birch (Betula alba [L.] var. papyrifera [Marsh.] Spach.) “wîgwas”. From “wîgwas” comes the word “wigwam” or house, because birch bark was used in covering the house, furnishing a waterproof roof. The root of the Paper Birch was used in medicines as a seasoning. Its sweetish, aromatic, wintergreen flavor disguised less pleasant doses. The root bark and maple sugar cooked together made a soothing syrup to alleviate cramps in the stomach. The white man has employed only the leaves medicinally as a diuretic.

Among the white men, Viburnum opulus is considered to be the same as Viburnum prunifolium, only less potent. It is recommended as an antispasmodic in asthma, hysteria, puerperal convulsions, and dysmenorrhea.

Yarrow (Achillea millefolium L.), “adjidamoˈ anûk” [squirrel tail]. The Pillager Ojibwe used the florets in ceremonial smoking and placed them on a bed of coals inhaling the smoke to break a fever.

Yarrow has always been a home remedy of the white man, and the Germans still use the dried flowers in a tea, called “schafesgarbetee”, to break a fever. Other uses are the same as above.

Common Burdock (Arctium minus Bernh.), “giˈ masan” [big stickers]. The Flambeau Ojibwe use the root of burdock as one of the ingredients of a medicine for pain in the stomach. It is also supposed to have a tonic effect.

Burdock root has quite a reputation among home practitioners among the white men as a diaphoretic, diuretic, alternative, aperient and depurative. It has been used for rheumatism, gout, pulmonary catarrh, chronic skin diseases such as scrofula and syphilis, and to dissolve urinary deposits. Externally it has been used as a salve or wash for eruptions, burns, wounds, hemorrhoids and swelling.

Fragrant Golden-rod (Solidago graminifolia [L.] Salisb.), “wasaˈ waskwûneˈk” [yellow light]. Besides being of use in hunting medicine, the flowers in infusion were used by the Flambeau Ojibwe for a pain in the chest.

Golden-rod leaves and flowers have at times held a rather important place in materia medica, for their carminative, and antispasmodic properties. They have also been used as an intestinal astringent.

Tansy (Tanacetum vulgare L.) “muckikiˈwît” [medicine]. The Flambeau Ojibwe have no distinctive name for this plant, claiming it came from the south and they were told it was good for fevers.

Among white men, it is deemed tonic, emmenagogue and diaphoretic. It has been used in a cold infusion in convalescence from exhausting diseases, dyspepsia, hysteria and jaundice.

While the Flambeau Ojibwe do not use this plant, the Pillager Ojibwe give it a name and use the root for a tea for heartburn. It was found growing at the north end of Bear Island in Leech Lake, Minnesota.

Among the whites, the virtues of the root are much overrated. The dried root is steeped in boiling water and is used as a stomachic and tonic, with slight diuretic and aperient action. 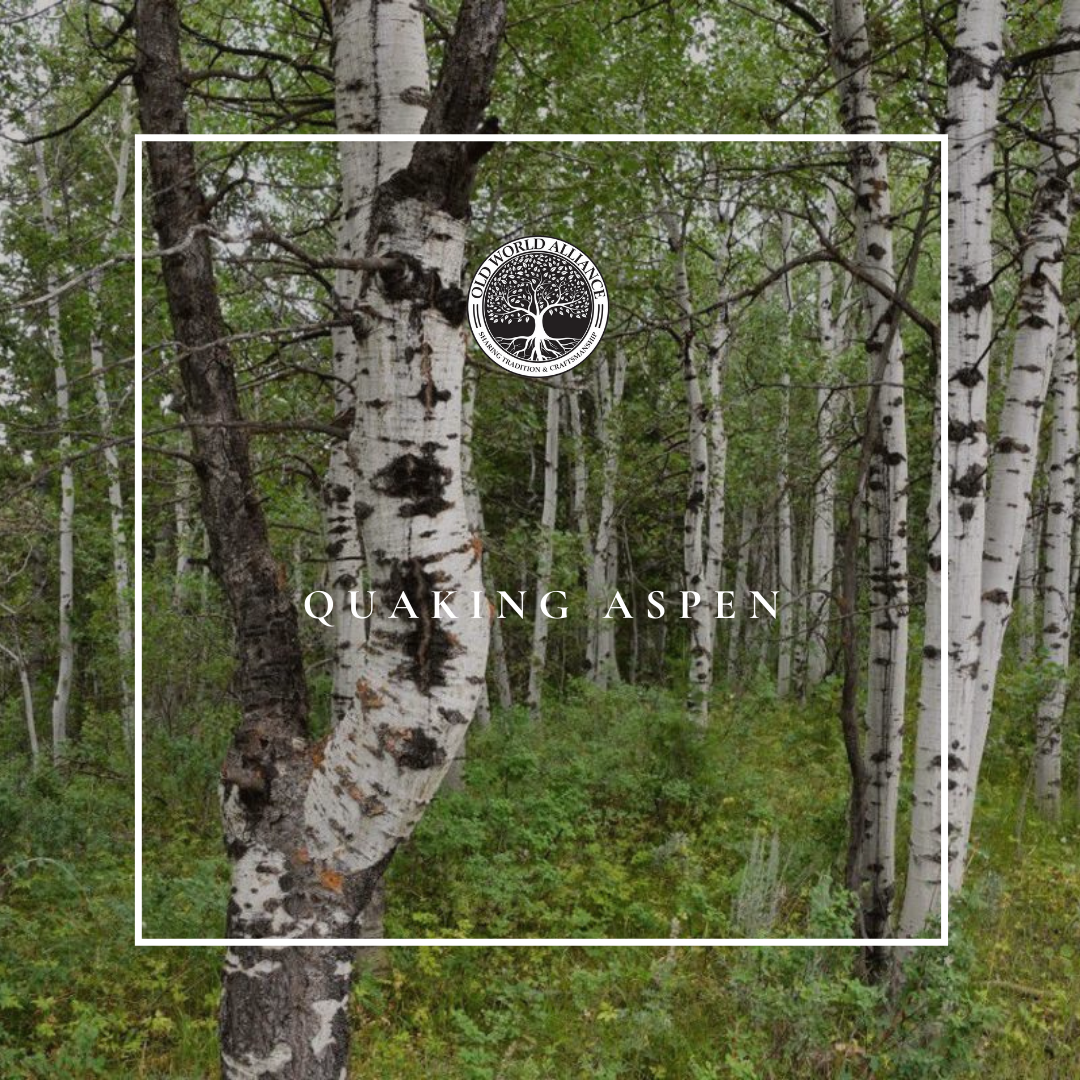 Quaking Aspen (Populus tremuloides Michx.), “asadi” [poplar]. The Flambeau Ojibwe gives this tree the same name as the Large-toothed Aspen. They use the bark of a young trunk for poulticing cuts and wounds. The astringent salicin in the inner bark undoubtedly draws the cuts together and causes healing. The Pillager Ojibwe distinguish the tree with a slightly different name, “asadins”, the diminutive of “asadi”, meaning “little poplar”. They use the inner bark for poulticing a sore arm or leg, and make the inner layer of their splints of the inner bark so that a broken limb may heal healthily. Eclectic practitioners use both bark and leaves in treating acute rheumatism, also to lower the temperature in fevers, to relieve pain and reduce arterial swellings, colds, hay fever, influenza, neuralgia and diabetes. Externally the whites have used it as a wash for gangrenous wounds, eczema, cancer, burns, and body odor.

I hope you enjoyed this resource!

If Jamie is involved it’s going to be awesome

You know if Jamie is involved it’s going to be awesome!

It’s the back to basics that we need to share again and OWA covers that and more, I can see the support growing, so much knowledge.

What a true alliance is

Wonderful owners, knowledgable instructors, great videos and a group that know what a true alliance is!

Great group of people who love to teach and learn.

Top of the line learning at your own pace

Top of the line learning at your own pace, love it

If Jamie is involved it’s going to be awesome

You know if Jamie is involved it’s going to be awesome!

An excellent group for bushcrafting, primitive skills, and self reliance. Led by Jamie L. Burleigh my go-to, most trusted instructor.

Like sitting around a comfortable fire in a lodge

A group of knowledgeable persons in bushcraft and survival sharing with like minded individuals. Like sitting around a comfortable fire in a lodge and sharing stories or failures and successes to help is all he better.

All my primitive skills and bushcraft friends MUST check this out

All my primitive skills and bushcraft friends MUST check this out

Depth of knowledge is incredible

Depth of knowledge is incredible

It’s the back to basics that we need to share again and OWA covers that and more, I can see the support growing, so much knowledge.

Old World Alliance is the place for anyone wondering how our ancestors accomplished daily tasks like gardening, leather work, woodworking, blacksmithing, hunting, and surviving. This world wide instructor base is extremely knowledgeable and all brought to one place on the internet for affordable classes that include private learning groups and one on one instructor discussions! Join the Old World Alliance Facebook group and definitely check out!

...and what I learned while making this batch of pure … END_OF_DOCUMENT_TOKEN_TO_BE_REPLACED

One of the things folks find most challenging about … END_OF_DOCUMENT_TOKEN_TO_BE_REPLACED

First Nation Tribes gave names and meaning to all of … END_OF_DOCUMENT_TOKEN_TO_BE_REPLACED

Old World Alliance is the world’s first association dedicated to Self-Reliance, Survival and Outdoor Skills. By collaborating with other outdoor companies, we share outdoor skills, trainings and classes with members around the world.

Whether you want to learn to build a fire, thrive in the wilderness, build a shelter, craft a sheath, forge a knife, learn old world remedies, bushcraft, survival skills, wilderness or primitive skills we can connect you with the right instructor.